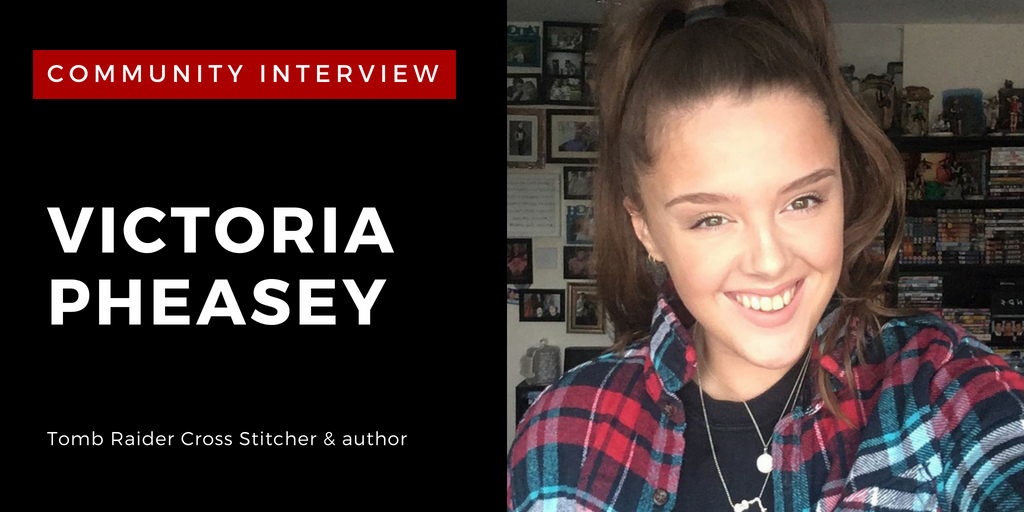 Round 2 of our community interview! This time we are talking with Victoria Pheasey, a Tomb Raider obsessed 27 year old, currently living in Warwickshire, UK. She loves to write, all in the hopes to become a successful author someday. Her other passions include cross-stitching, gaming, dancing and singing — just to name a few! Enjoy the read and don’t forget to pay Victoria a visit by following the links at the end of the article.

Since when have you been a Tomb Raider fan, what do you love most about the series and which one is your favorite game?

For as long as I can recall really, I was probably only six. Tomb Raider was the first game I bought, I remember receiving money from my birthday and just kept saying that’s all I wanted to buy. It was through just seeing Lara on the screen and I was mesmerized from that moment seeing her in game. From a young age, I just felt if she could do it, so could I. Lara has been such an influence to me throughout my life, I think she’s been such an iconic female in so many ways, not just to myself but to millions of fans across the globe. I think that with having such a strong woman in a game, growing up she was someone who I looked up to.

I felt I could relate to her as she did her own thing and didn’t let anything stop her from what she wanted to do. In my experience, because I had always been ‚one of the boys‘, it was refreshing to be able to look up to such a woman who hadn’t been created to shy away from anything, nor be just a token female that needed to be rescued. I’d usually be running around the playground believing I was Lara Croft, dodging tigers, atlantean creatures and/or Larson or Pierre.

My favourite game will always be the original Tomb Raider (1996). As for the reasons above among many others, it was so groundbreaking for me. Not only was it incredibly challenging, you didn’t have any other games like it back then. Nathan McCree’s music is still incredible to this day, Shelley Blond’s voice for Lara was just perfection, vocalised with the sharp wit that I still adore. Along with Toby Gard and Core Design’s work, not forgetting to credit Vicky Arnold for her wonderful story in that game, as with many others.

It just brings back wonderful memories with that game in particular for me. You really felt isolated and your path wasn’t obvious as it is in most modern games. I do love the other Tomb Raider games, especially 1-6 as the characterization of Lara, for me, excels. I do enjoy the era of LAU, but the Core years will always be my favourite.

Thank you! My Grandma taught me how to stitch when I was a child, but I only picked it back up around four years ago after seeing a pattern online for Tomb Raider Legend and it went on from there.

What advice can you give fellow raiders who are interested in trying cross stitching themselves? What’s the best way to start?

I would suggest to try something small first. You can pick up small kits that range from £2-£5 that are a good place to start. After that, the world is your oyster really. There are tons of websites where you can convert any image into a cross stitch pattern, so there many ways to build your skills really. YouTube have good tutorials if you are starting out, but I do think that whatever technique works best for you is a winner. As long as all of your stitches look the same, all is well!

Which of your cross stitches do you like most?

This is a tough one! I’ve been very lucky to have worked with some amazing clients in creating pieces for either themselves or loved ones, even the wonderful Extra Life charity. I do enjoy working on anything to be honest, as I love the process. But my favourite ones to do will always be Tomb Raider.

The images are all commissions I’ve had the pleasure of completing, with the exception of the Tomb Raider II ’40 Fathoms‘ wetsuit piece I have recently finished that will be going into my Etsy shop soon. 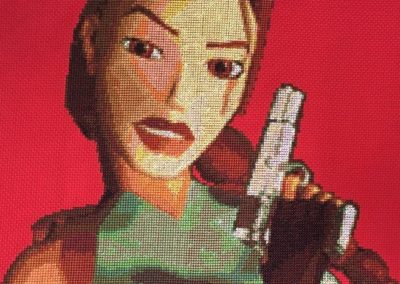 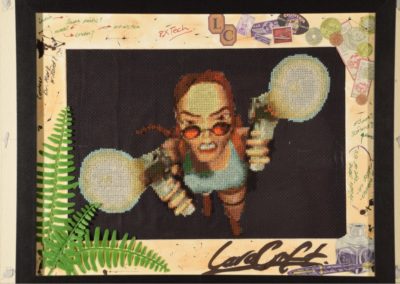 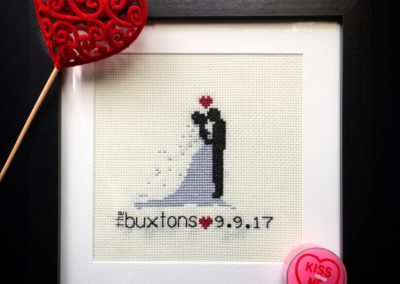 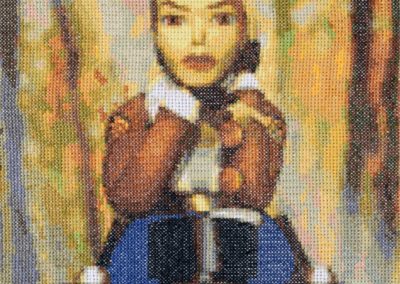 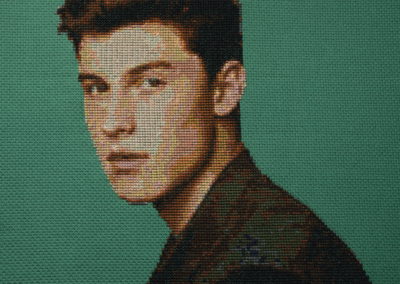 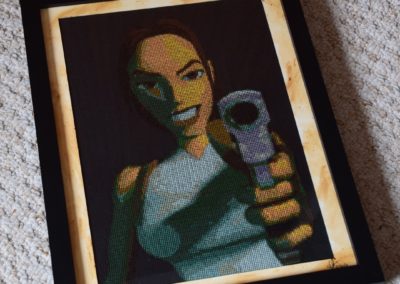 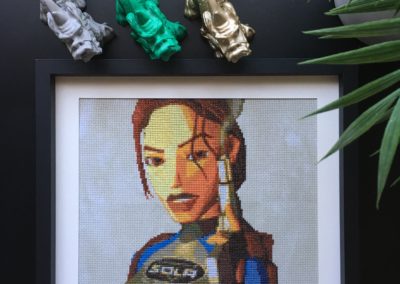 What’s the best way to get in touch with you for commissions?

I am able to take all inquiries on all of my social medias for Bubblegum Stitches xo, or my personal twitter @The_Phease. I’m more than happy to have a look at some images and draw up a free quote, also we can have a chat and virtual cup of tea which is always a winner!

You are into writing — what do you write and what are your favourite authors? Also, which Tomb Raider game had the best story in your opinion?

I’ve recently finished the first draft of my third romance novel, however I mostly read thrillers believe it or not. I prefer to read those when I’m writing so I don’t subconsciously store anyone else’s work!

My favourite authors are BA Paris, I think she’s an exceptional writer – I typically can’t put anything of hers down once I’m quickly invested, the same goes for anything by SJ Watson, his work is equally as brilliant.

I do love Tomb Raider (1996) obviously, however Angel Of Darkness‚ story is one that I still find fascinating. I wish we would have been able to have seen the trilogy as the wonderous Murti Schofield had envisaged for us all. I think AOD for us fans always holds a bit of a special place in our hearts.

I think introducing Kurtis Trent into the story was incredibly interesting, to see Lara interact with someone who was working alongside her as opposed to against was a treat to see. We’d always seen a friend of Lara’s or a mentor, so it was interesting for me to see a relationship between these two characters who pretty much began as enemies.

With this also, Jennifer Milward has written a novel based on the game as well as an audiobook which beautifully fills in the gaps where the game couldn’t take us. She’s a wonderful writer and voice actress as well, with the likeness of Lara too, you couldn’t ask for more. I really felt as if she captured Lara’s personality perfectly, also showing us her vulnerability in moments of AOD we weren’t able to witness in game.

Thanks for the interview Victoria!

Send your suggestions in the comments! Also check out our interview with Eddy’s Tomb Raider Channel.

Nice to read, I’m always happy when there are loyal fans of AOD too. 🙂